South African metropolitan cities (Metros) are currently experiencing pressing urban development issues, with many residents living in extreme poverty and inadequate conditions. The urban poor are often socially excluded and are in need of effective government intervention. The challenge of informal settlements is the most recognisable and is often at the forefront of political media, human settlement policy and interventions. However, the plight of the backyard dwellers is frequently overlooked and disregarded.

Because of housing backlogs and economic recession across South African cities, amongst others, it has become more common for existing dwellings to accommodate tenants in predominately informally constructed dwellings. This increase in backyard dwellers is posing a significant development challenge for municipalities. According to the HSRC’s review on the most recent Census (2011), there has been an interesting growth in the number of households living in backyard dwellings across the Metros. In almost every city (except the City of Cape Town and Tshwane), the increase in backyard dwellings has been counteracted by a decrease in households living in free-standing shacks in informal settlements. The growth in the backyard rental market is indicative of the current urban housing crisis characterised by a shortage of affordable (including rental) accommodation.

Given that backyard rentals are such a significant – and growing – reality in South African cities, it is important for the Metros to develop appropriate strategies. Such strategies will have to be based on both the positive and negative dimensions of the backyard rental market.

The main pros of the backyard rental market are that it provides a low-cost form of housing/shelter, aids in the densification of existing townships/settlements, produces higher thresholds for the improvement/development of public transport and social facilities, it is a source of rental income to low income households, and it enables flexibility.

The most obvious cons include the overloading of infrastructure networks and services, lack of tenure security, lack of tenant protection from possible exploitation by the landlord, potential overcrowding that could have serious health implications, and generally, the built quality of these is structures is often deemed as substandard. These constraints tend to have significant repercussions for government finances and legislation. 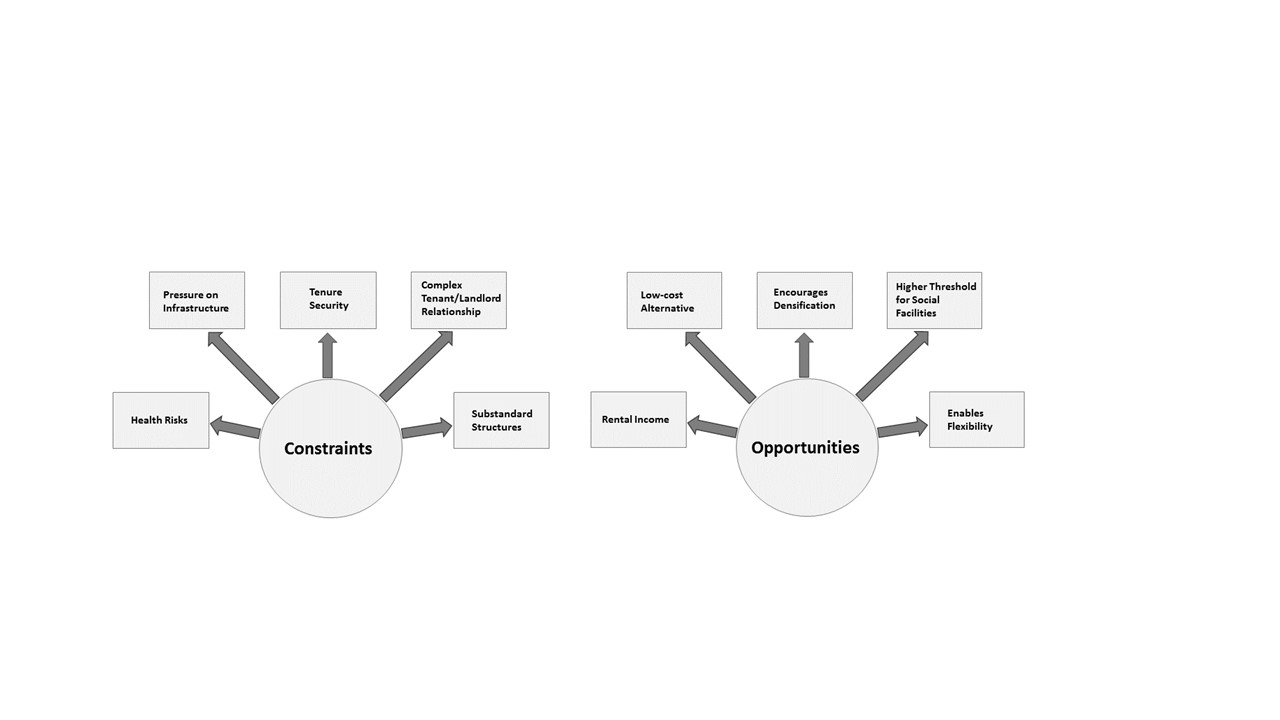 Nonetheless, this market exists because it offers a housing solution to many who are either not eligible for a government housing subsidy or, most importantly, for whom there is simply no alternative housing option available, given the housing backlog and the state of the (formal) housing market.

Although the backyard rental market is an important area of intervention and a critical component of the housing stock, provincial and national policy to regulate this market effectively remains under-developed or in ‘the works’. According to Lategan and Cilliers at the 2013 ISOCARP Congress, provincial governments’ attempts to address the backyarder issue has proven unsuccessful, mainly due to the complexity of the issue and the lack of official/sufficient support from national government. Despite the lack of provincial and national policy addressing this particular challenge, Metros have and continue to attempt to grapple with the complexities around the backyard rental market. The sector has been referenced and acknowledged in core local government documents such as the Integrated Development Plan (IDP) and the Built Environment Performance Plan (BEPP) to varying degrees across the 8 Metros.

The City of Cape Town (CoCT) in particular has demonstrated its official support, in terms of research and the development of strategies/policy that explicitly deal with the vulnerabilities that backyard dwellers experience. The CoCT has recently developed initiatives that deal with access to basic services and is currently formulating a draft policy to appropriately manage the backyard rental market. The draft policy aims to deal with broader issues such as regulating rental rates to prevent the exploitation of tenants by landlords, upgrading bulk infrastructure to meet increased pressure, and prevent questionable evictions/displacements of tenants by landlords.

Ekurhuleni is also making some sort of headway with regards to addressing the plight of backyarders within its city. The backyard rental market has been officially acknowledged in Ekurhuleni’s Integrated Sustainable Human Settlement policy and to a certain extent, the City is trying to appropriately support this market through initiatives such as the Community Builder Programme, aimed at upgrading small rental accommodation.

Yet, while all 8 Metros discuss issues related to backyard rentals in core municipal documentation such as the 2016/17 IDP and BEPP, most Metros, including the City of Johannesburg, eThekwini, Buffalo City, Nelson Mandela Bay, Mangaung and Tshwane, do not provide evidence of having adopted a backyarder support strategy. And while Ekurhuleni and Cape Town show evidence of a backyarder support programme, at this stage it is too early to assess their scope and impact.

The lack of evidence of strategies for backyarders is characteristic of the typical South African housing delivery approach that promotes homeownership through BNG housing instead of public rental housing. The public housing market, overall, is currently experiencing a decrease in housing delivery and an increase in demand, in the midst of an unaccommodating formal private rental housing market. This, however, makes the backyarder rental market a workable alternative and, definitely, a viable option.

It is therefore, imperative that backyarder support strategies and policies focus on better facilitation of what already exists, by addressing current key issues within the market such as safety, health and access to public services. Interventions need to have a certain sensitivity as well as need to appropriately handle the complexity of this market, in order to mitigate further perpetuating negative impacts.

There are a few possible initiatives that could support the backyarder rental market effectively, such as:


This is by no means an exhaustive list, but merely a starting point for a Metro strategy on backyard rentals.

With this being said, the backyarder rental market poses some complex challenges, which require innovative policies development and interventions. This market, however should be accommodated as an accepted housing typology. New initiatives should be explored to provide landlords the opportunity to gain access to a supplementary income as well as improving backyard structures, whilst keeping the market affordable. The opportunities and challenges associated with backyard living, the development of supportive policy and, more especially, the implementation thereof warrants further engagement and research.

Increasingly cities are adopting strategies for informal settlements in line with national government targets, but there is a general lack of alignment. 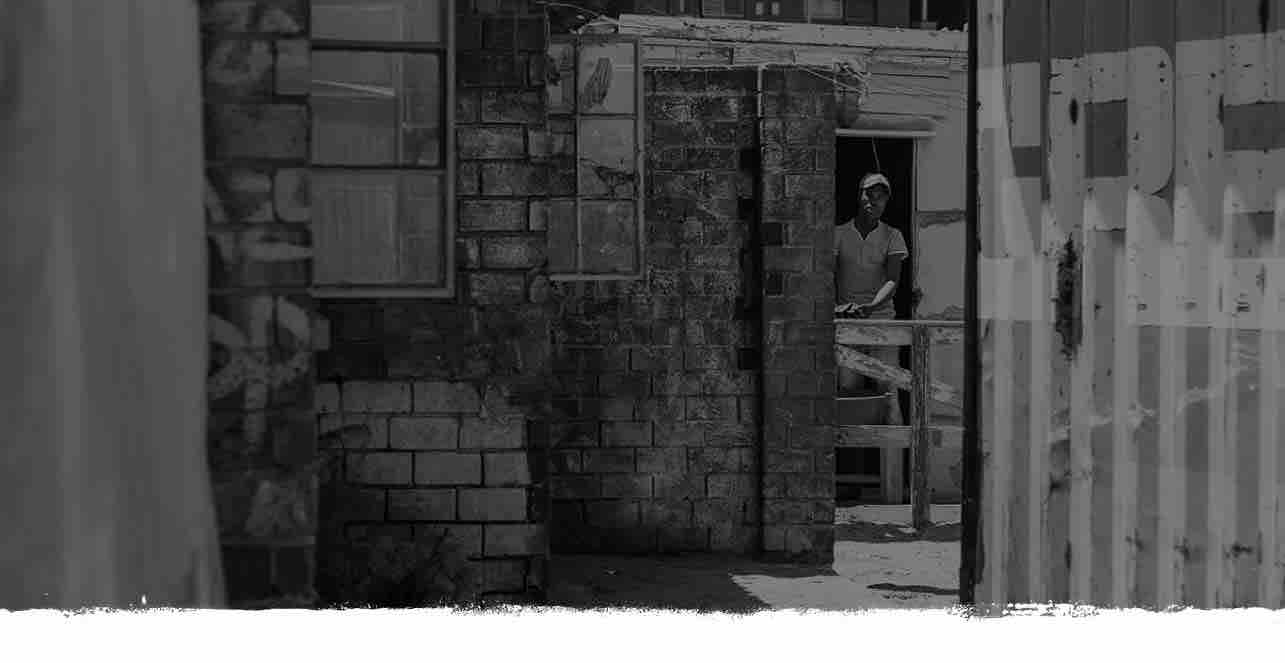 South African metropolitan cities (Metros) are currently experiencing pressing urban development issues, with many residents living in extreme poverty and inadequate conditions. The urban poor are often socially excluded and are in need of effective government intervention. The challenge of informal settlements is the most recognizable...

Analysis of the policies, programmes and projects presented in core municipal documentation was the starting point for developing the Data Index. Researchers in Isandla Institute’s Urban Land programme trawled through more than 50 pdf documents ranging from 50 – 300 pages to extract data. ..

Can’t find what you’re looking for?